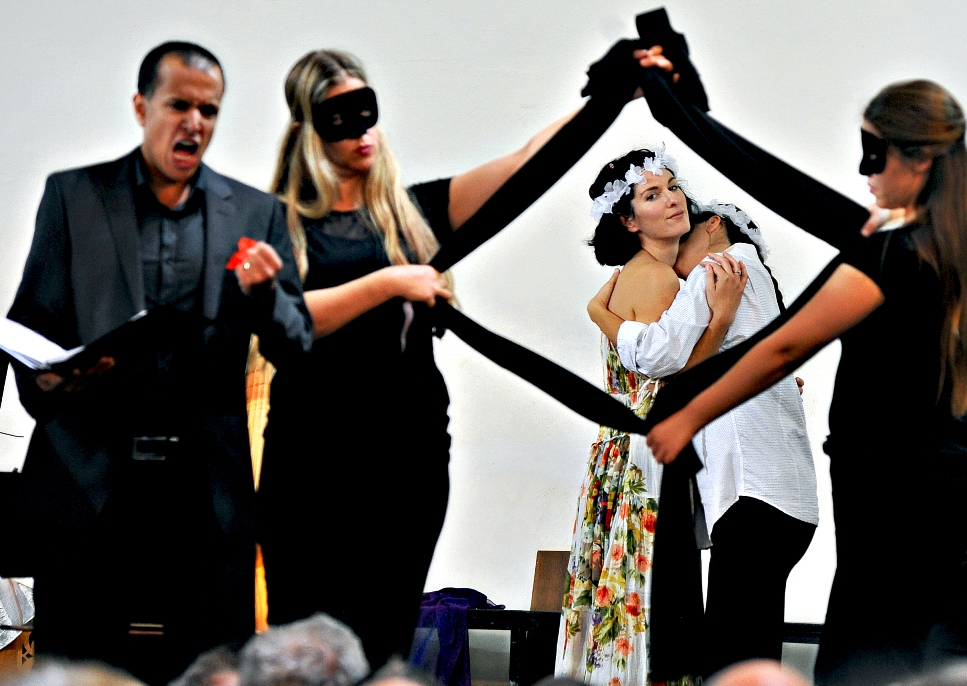 Myrna Herzog and Ensemble PHOENIX's great team of singers and musicians on early instruments, present this unique blend of the European Baroque and Latin American musical traditions, a wonderful entertainment with exotic colors and rhythms.

We are indebted to Dr. Diana Fernandez Calvo for making available her critical study of the transcribed versions and manuscripts of Lima and Cusco of the opera, conducted within the research project PIN 1 of the UCA (Universidad Católica Argentina).

We wholeheartedly thank the support of the Spanish Embassy in Israel, the Rich Fund, the Israeli Ministry of Culture and Sport, to Hanna Tsur ,  Gershon Cohen and the Abu Gosh Festival for making this possible.

"This first American opera has been revived in a first Israel performance by the Ensemble PHOENIX of early instruments and the Voce Phoenix singers, conducted by Myrna Herzog. It was a delightful acquaintance with a little-known musical New World. All the singers and instrumentalists obviously enjoyed their roles immensely, infecting the audience with their vibrant identification with what they were doing. The performance was semi-staged suggestively and tastefully by Regina Alexandrovskaya." Ury Eppstein, the Jerusalem Post

"La Purpura de la Rosa", for the first time in Israel: it certainly looks good, and above all sounds good. The three main singers, Hadas Faran-Asia, Revital Raviv and Alon Harari, display a vocal work worthy of praise, heading a team of eight singers. Musicians, members of the PHOENIX Ensemble, were led by Myrna Herzog who conducted the whole production, and stage director Regina Alexandrovskaya, that managed to make opera even within the big church in Kiryat Yearim. " Yossi Schifman to Nitav Robinson, Morning Show , Reshet Bet

"The Opera is interesting, and it is not often that one has the opportunity to see unusual things. Baroque lovers very much enjoyed . I enjoyed the most". Eli Leon, Elybikoret

"Ensemble PHOENIX’s premiere of Venus and Adonis – La Purpura de la Rosa issued in the new concert season with a fresh and exciting event. Another groundbreaking event initiated and directed by Dr. Myrna Herzog.  As usual, Myrna Herzog’s choice of singers included some artists at the height of their careers and some new faces. Revital Raviv presented the scheming, feminine, languorous and appealing Venus with alacrity, her pearly soprano voice as fresh as ever. Hadas Faran-Asia portrayed Adonis with presence and competence, her large, fruity vocal timbre expressing the impending tragedy of the situation, her dramatic coloration of the text reaching out into all corners of the church. A Spanish speaker, soprano Michal Okon is on home territory in this medium. As Bellona, Mars’ sister, the Roman goddess of war, she addresses both audience and stage to inspire warlike frenzy, her sturdy, stable voice serving the role well. Countertenor Alon Harari was a charismatic Mars, Venus’ hurt, (has-been) lover, giving full passion to the role of a man caught in the dramatic gridlock of the situation. His articulacy and his compellingly well-endowed and very beautiful vocal timbre drew the audience deeper into the musical/theatrical experience. Then there is the multifaceted artist Eliav Lavi. As a member of the instrumental ensemble, he played both theorbo and Baroque guitar; a tenor, he also sang three roles, sang in ensembles, often playing and singing at the same time. His versatility – including his sonorous voice venturing down into bass range! - added much to the dynamic character of the work. A feather in his cap! Talia Dishon made for an excellent Cupid, her dynamic, whimsical, imp-like facial expressions and fleet-of-foot movements genially used to advise and manipulate as she flitted around the stage; her easeful and creamy soprano timbre provided listeners with much felicity. Ella Rosner and Liat Lidor gave charming, informed presence to their roles as peasant girls (and other roles).

Regina Alexandrovskaya’s stage direction excelled in its small, effective touches. Seated on stage, Herzog’s instrumental ensemble created the magical colors of the score, one spiced with many jaunty dance rhythms and the rich timbral colors inherent in Peruvian music. The ensemble supported the singers articulately and entertained with vigor and eloquence. It was a theatrically staged performance that shone, moved with energy, surprised and delighted. " Pamela Hickman's Concert Critique Blog