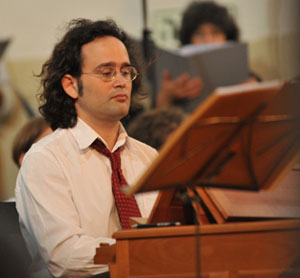 Born in Israel, Yizhar Karshon is a harpsichord player, recently graduated from the prestigious early music school, the Schola Cantorum Basiliensis, having studied with Jörg-Andreas Bötticher (harpsichord and thourogh-bass) and Rudolf Lutz (Keyboard Improvisation). He is also a graduate from the Jerusalem Music Academy, having studied with David Shemer at the Musicology department of the Hebrew University.

Yizhar Karshon has participated in many international early music festivals, such as the Utrecht Early Music Festival in Holland, the Brežice Festival in Slovenia and the York Early Music Festival in England. In Israel he has performed in the music festivals of Abu-Gosh, Kfar-Blum and Ben-Haim and within the concert series of the Israeli Philharmonic Orchestra, the Israel Symphony Orchestra Rishon LeZion and the Jerusalem Baroque Orchestra. He is the founder and musical director of qui regna amore, an early music ensemble that combines musicians from Israel and from Europe. He is as well a member of the modern music ensemble Three Plucked Strings, with which he has performed in Israel, Switzerland, Italy and the Philippines.

Yizhar Karshon was awarded a special governmental Swiss scholarship to studying in Switzerland (ESKAS), an excellence scholarship from the Dean of the Performing Arts Faculty in the Jerusalem Music Academy, and scholarships from the America-Israel Cultural Foundation.